Vancouver, British Columbia--(Newsfile Corp. - December 17, 2019) - First Vanadium Corp. (TSXV: FVAN) (OTCQX: FVANF) (FSE: 1PY) ("First Vanadium" or the "Company") is pleased to provide a regional gravity survey as support for the high-grade gold target identified by Dave Mathewson and announced November 12, 2019 on its Carlin Vanadium Project, 6 miles south of Carlin, Nevada. Many north-central Nevada Carlin-type gold mines and deposits are associated with gravity highs. Because of this, gravity surveys (a geophysical technique) have proven to be a paramount targeting tool for gold deposits in Nevada.

The association of gravity highs with gold mines and deposits is visually striking in the accompanying figures encompassing the vicinity of the Carlin Vanadium Property, within the southern portion of the Carlin Gold Trend. The figure on the left is the regional structural interpretation by Mr. Mathewson showing north-south and west-northwest trending structures. Many gold mines and deposits fall along the identified structures such as with the Emigrant mine, North Bullion and Pinion deposits and the string of deposits/mines along the Rain fault (Rain, Tess, Saddle). The figure to the right, at the same scale, shows those same structures, mines and deposits, superimposed on a regional gravity map. What becomes very evident is the coincidence of the linear gravity high (red/purple colours) with these structures that host gold mines/deposits. The 9-mile north trending structure that cuts through the Carlin Vanadium Property also demonstrates a similar coincident gravity high in the figures. The Company's Carlin Vanadium Project covers 2 miles of the 9-mile long structure. 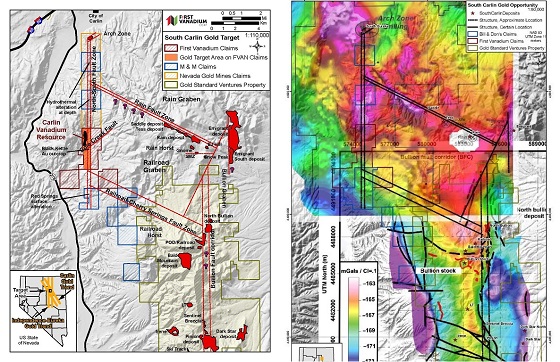 To view an enhanced version of Image 1, please visit:
https://orders.newsfilecorp.com/files/3372/50846_firstvan.jpg

Mr. Dave Mathewson, renowned Carlin Gold Trend specialist and geological advisor to First Vanadium, interpreted the Carlin-style high-grade gold target at depth on the Carlin Vanadium Project (see news release dated November 12, 2019) based on a number of factors; his familiarity with the area, structure, regional gravity data, and mineralized and altered rock exposures and intercepts from drilling along the 9 mile trend.

Paul Cowley, President & CEO, states, "Collectively these supporting features made a sound story but the convincing factor for Mr. Mathewson was the coincidental gravity anomaly. While the Company remains focused on advancing its vanadium resource through the completion of the ongoing Preliminary Economic Assessment (PEA), management sees this compelling gold target as a valuable augment and is currently exploring several options to advance it, including by strategic JV partners, while advancing its vanadium resource."

Mr. Mathewson is a former Newmont Mining Corporation Regional Exploration Manager. Mr. Mathewson was instrumental in several significant gold discoveries in the Rain and Railroad Mining Districts in the southern portion of the Carlin Gold Trend, where the Carlin Vanadium Project is located. During the 1990's while at Newmont, Mr. Mathewson led the team which discovered the Tess, Northwest Rain, Saddle, and South Emigrant gold deposits in the Rain District, which total over 4 million ounces of gold. In 2009, he was a founder of Gold Standard Ventures Corp. (GSV-TSX and NYSE) and served as its Vice President of Exploration until 2015. During this period, his exploration team discovered the North Bullion gold and Bald Mountain gold/ copper deposits, as well as acquired the Pinion gold deposit, all in the Railroad District.

ON BEHALF OF FIRST VANADIUM CORP.

per: "Paul Cowley"
CEO & President
(778) 655-4311
This email address is being protected from spambots. You need JavaScript enabled to view it.
www.firstvanadium.com

Technical disclosure in this news release has been reviewed and approved by Paul Cowley, P.Geo., a Qualified Person as defined by National Instrument 43-101, and President and CEO of the Company.

To view the source version of this press release, please visit https://www.newsfilecorp.com/release/50846

Phenom (as First Vanadium Corp.) was recognized as a Venture 50 company in 2019.
The Venture 50 logo is a trademark of TSX Inc. and is used under license.